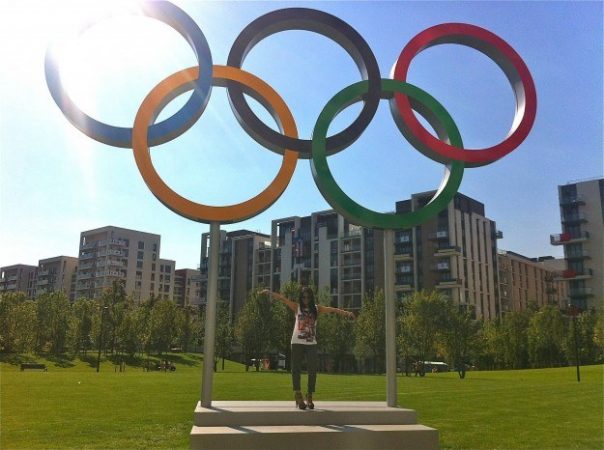 Olympic rings in the Olympic Village

This is Victory Park in the Olympic Village, which housed 16,000 athletes during the Games. I was given a few hours access to have a nose around. 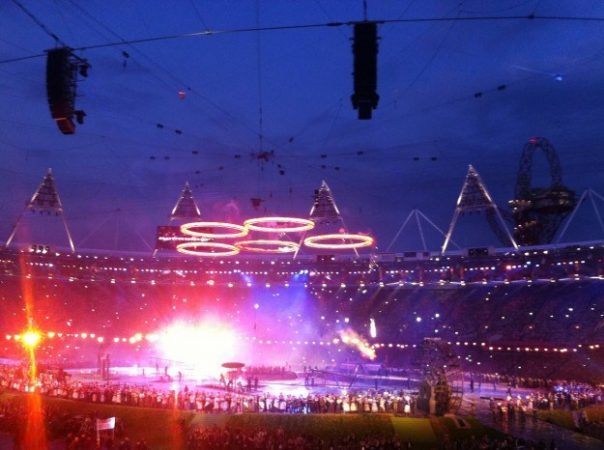 I actually took this during the rehearsal the day before the ceremony. I got goosebumps when I saw the Olympic rings emerge from a forge. 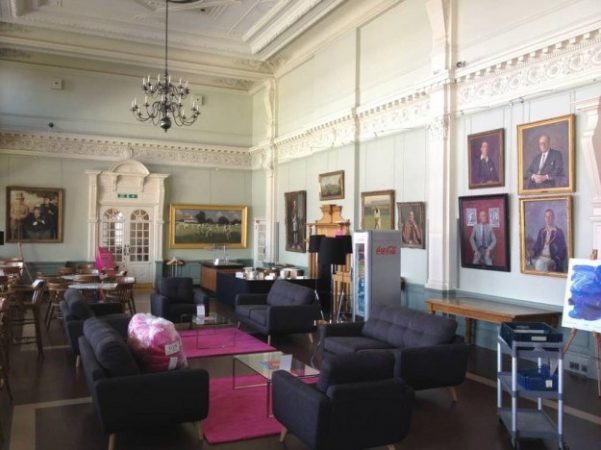 During the Olympics, archery was a guest in the home of cricket. This may be the only time you ever see pink carpets in the Long Room! 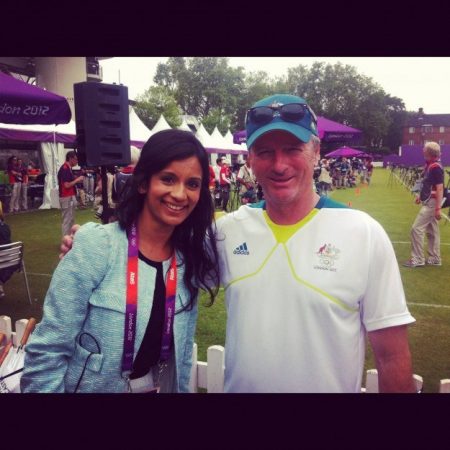 I wasn't expecting to spot Steve Waugh at Lord's during the archery competition. It turns out he was there to mentor the Australian team. 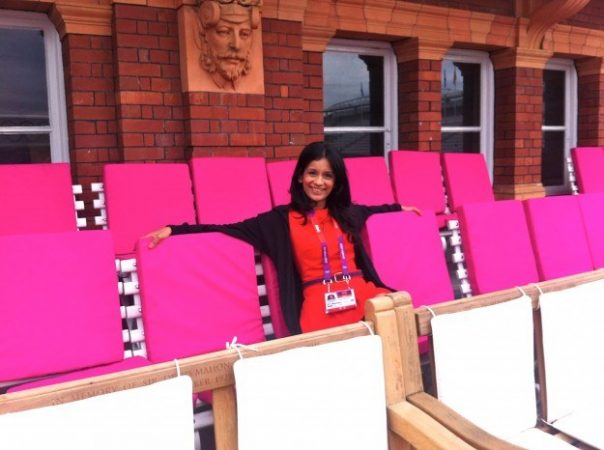 While presenting the archery action from Lord's, I took the opportunity to chill on the Pavilion terrace. This was just incase it was the only time I would be allowed such great access! 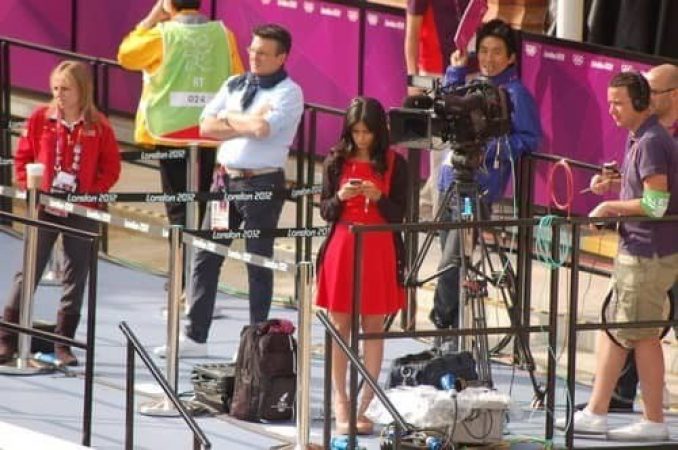 The mixed zone at a sporting venue is an area assigned to the media. Someone in the crowd snapped this picture of me and the BBC team in the mixed zone. 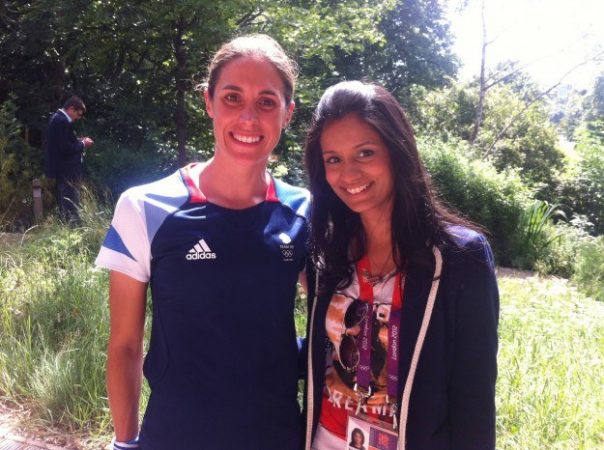 As I follow the triathlon circuit, I also covered the sport for the Olympics. This photo with Helen Jenkins (who was world champion at the time) was taken ahead of the women's race. She's one of the nicest people in sport. 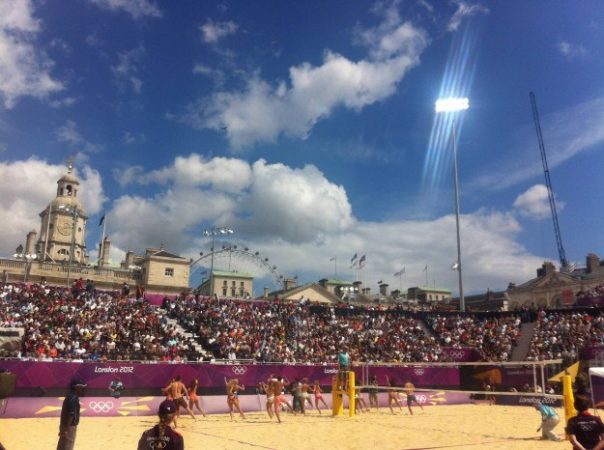 This was the most spectacular Olympic venue. Beach volleyball in the heart of the London. A genius idea! 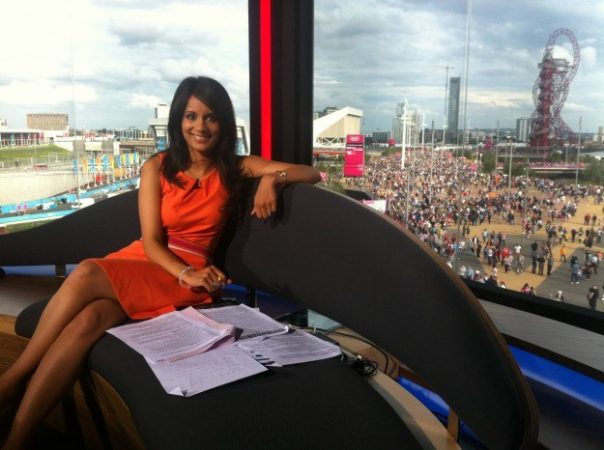 The BBC One studio in Olympic Park

I was on standby in the studio while other presenters were out at venues on 100m final night. 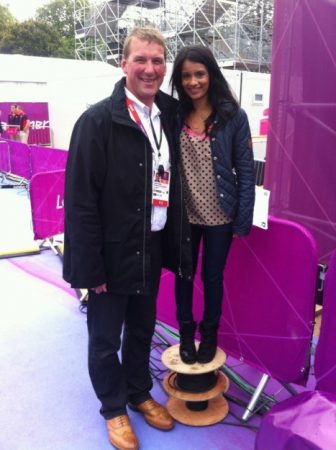 The dizzy heights of Matthew Pinsent

The Olympic champion rower was filming in Hyde Park while I was covering the women's triathlon. We never get bored of highlighting our height difference! 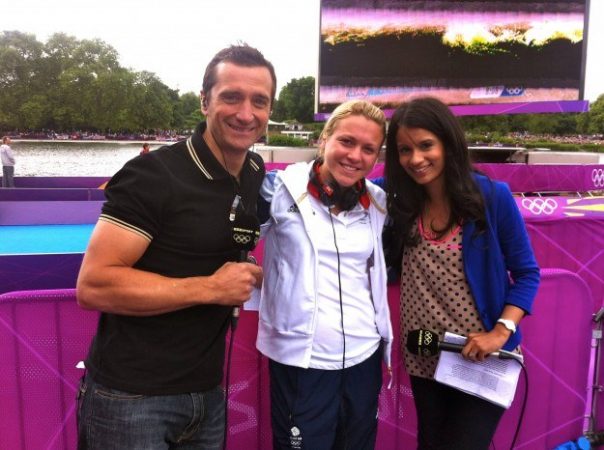 I was joined by Graham Bell and Vicky Holland (who competed in the women's race) for the men's triathlon in Hyde Park. 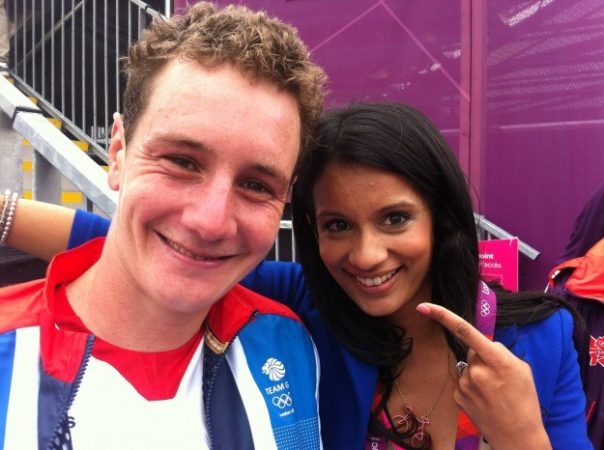 This photo with Alastair Brownlee was taken after the race while his brother Jonny, who won bronze, was receiving medical attention. Ali wasn't worried at all and said it just showed how hard triathlon is. 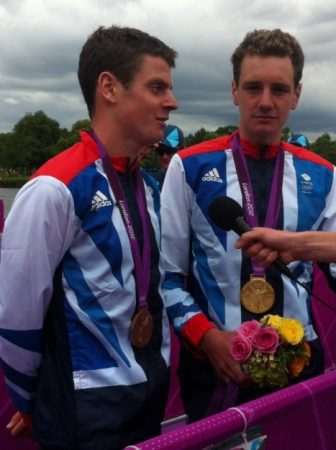 I took this photo after the triathlon medal ceremony. Jonny wasn't feeling great but still did all his media interviews. 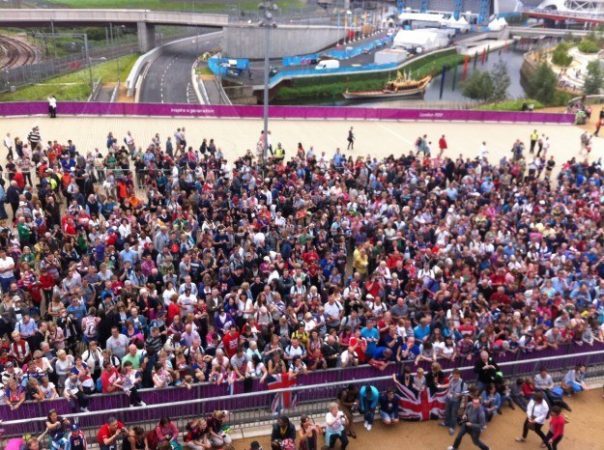 Outside the BBC Studios in Olympic Park

The crowds in Olympic Park were fantastic. They always seemed to know when we had an Olympic medallist in one of the BBC studios! 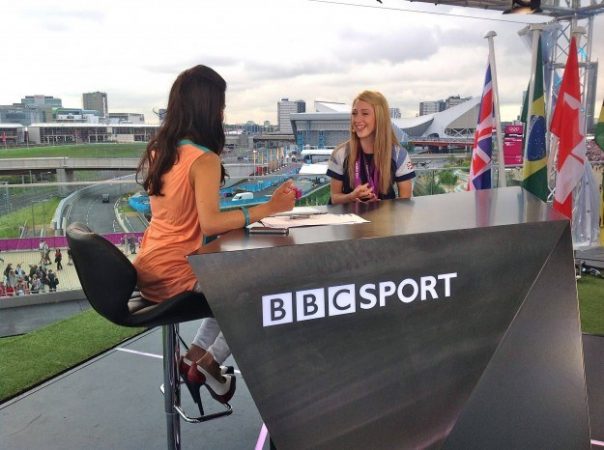 After winning two gold medals, cyclist Laura Trott came in for a long chat on BBC Three. She came across as a very funny, down-to-earth young woman. 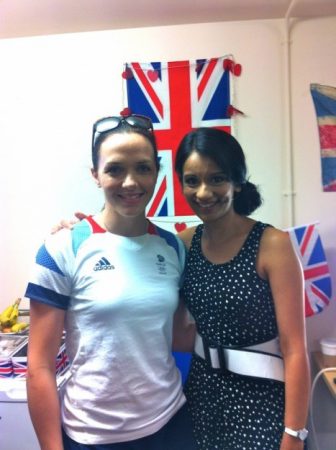 The BBC green room was always a good place to star spot. I first met Victoria in Beijing so it was nice to say hello in London too. We had a quick chat about our love of shoes! 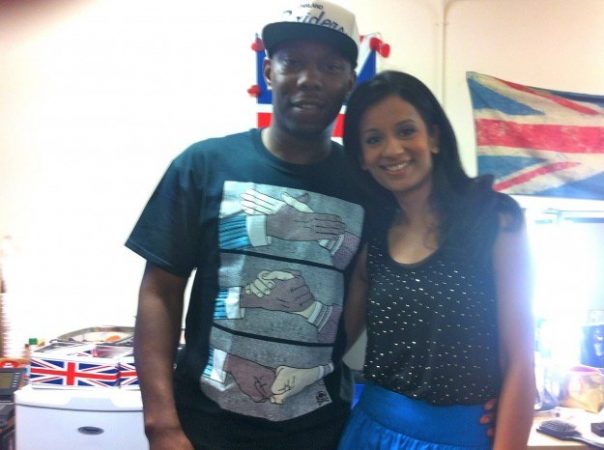 After his performance at the Olympic opening ceremony, Dizzee Rascal came into the BBC studios for a chat. I met him in the green room. 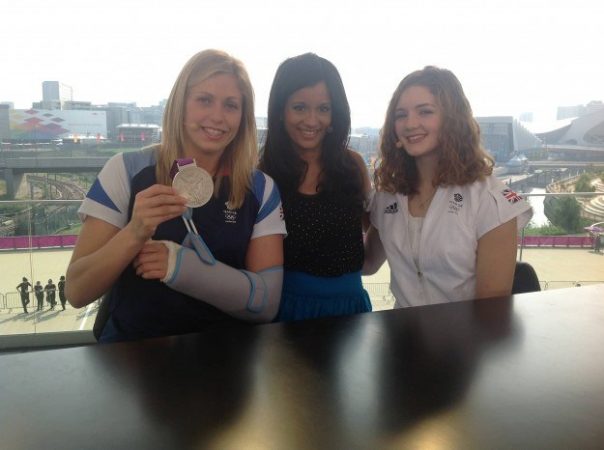 After they finished competing, judo fighter Gemma Gibbons came in to talk about winning an emotional silver medal which she dedicated to her mum. I also interviewed gymnast Jennifer Pinches about her 2012 experience. 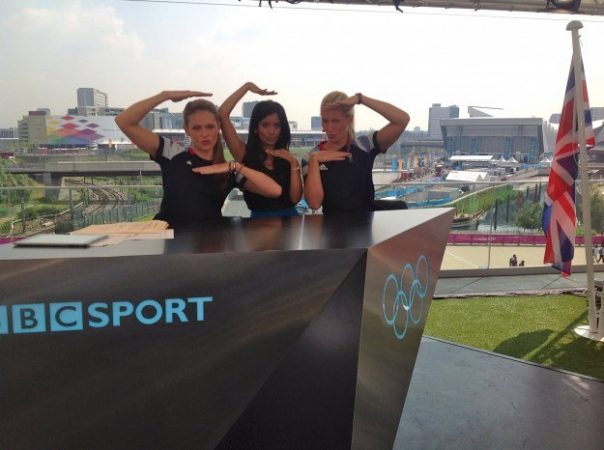 Fran Leighton and Rosie Morris came in to talk about their Olympic experience. They pointed out how my microphone looked like the ones Madonna uses so we Vogued like posers. 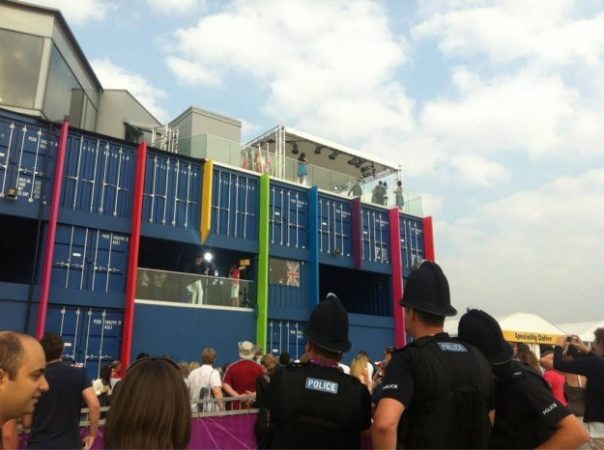 This was taken by a friend of mine. The crowds are all gathered for the Olympian (I think it's Mo Farah!) being interviewed in the radio area in the centre. I'm busy presenting in the BBC Three studio in the top right of the picture. 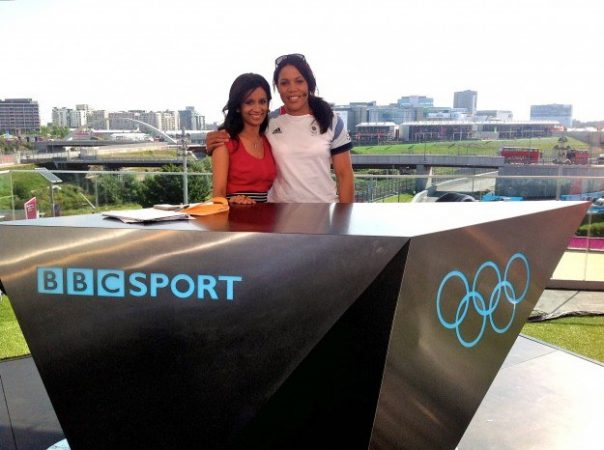 Catching up with Shanaze Reade

I was at the BMX track in Beijing when Shanaze crashed out of the final. She finished 6th in London and came to talk about another disappointing Olympics, but still had a smile on her face! 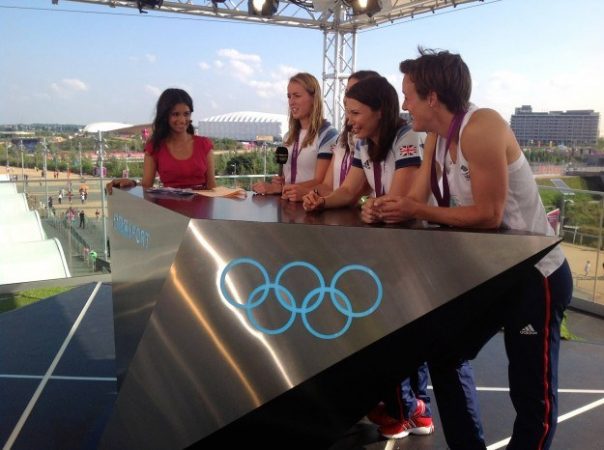 After winning bronze at the Games, four members of the GB women's hockey squad came in to the BBC Three studios with their medals. 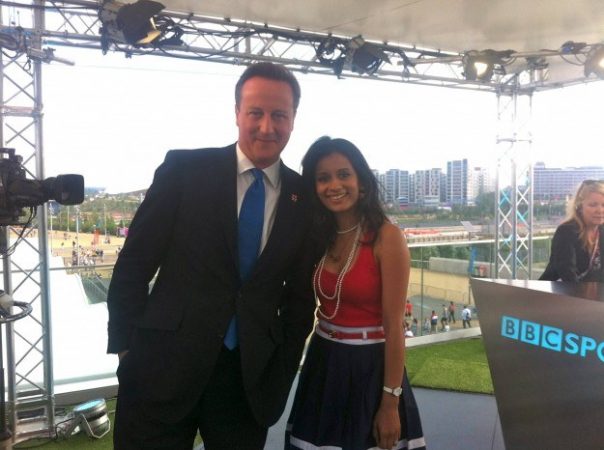 The PM comes round to visit

I was presenting live in the BBC Three studio when I saw David Cameron enter. He was being shown around and we lent them a corner of our studio so he could be interviewed by BBC Sport. 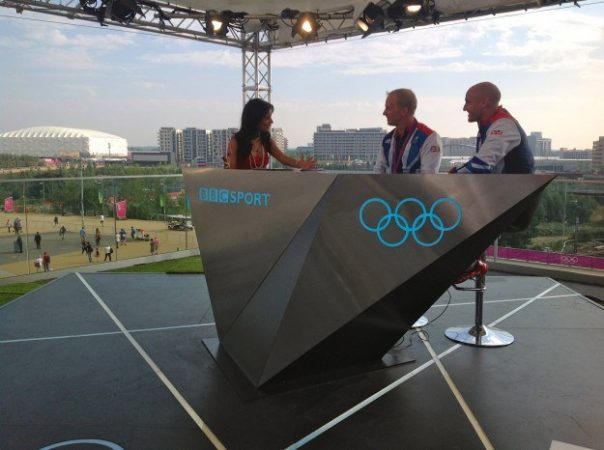 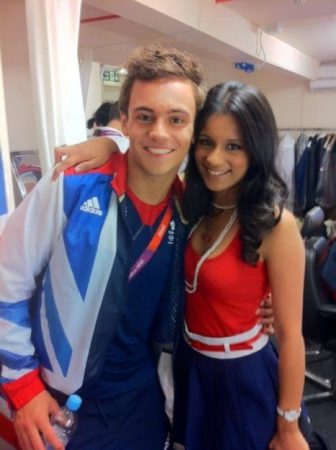 Bumping into Tom Daley in the BBC green room

I've known Tom for 6 or 7 years since my days on Newsround so it was great to be able to congratulate him on his Olympic medal in person. 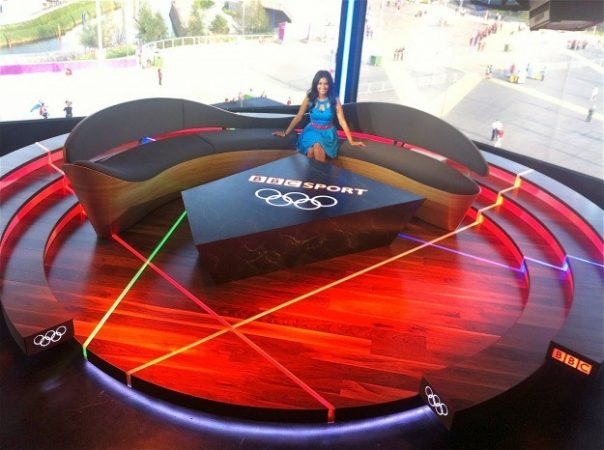 Here's a full view of the BBC One studio inside Olympic Park. It was previously used as the World Cup studio in Cape Town. 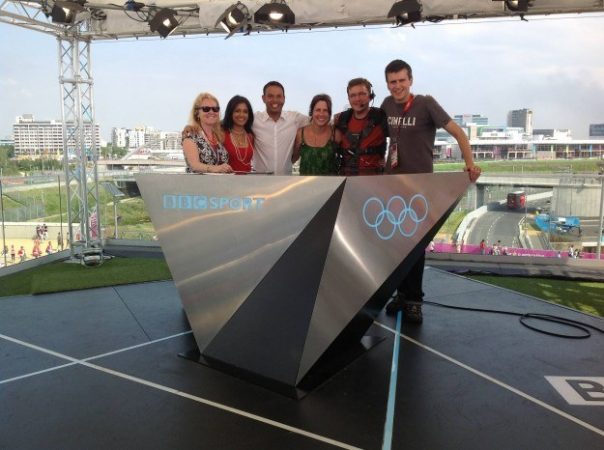 This photo was taken on the final day of the Olympic Games. This was the whole studio crew! 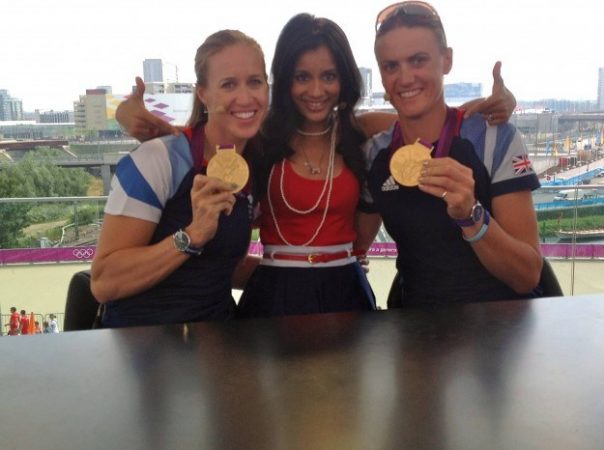 GB's first gold of the Games

Helen Glover and Heather Stanning came to the BBC Three studios to show off their gold medals. Not only did they win the first gold for Team GB at London 2012, but they made history by becoming the first British women to win a Olympic rowing title. 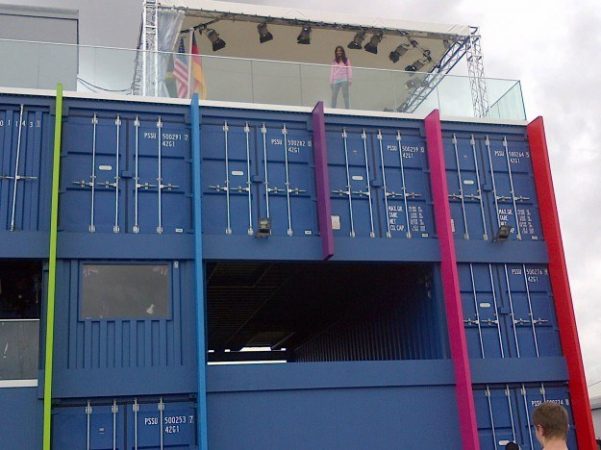 BBC Three studio from the ground

My husband took this photo of me in our studio while in Olympic Park one day. 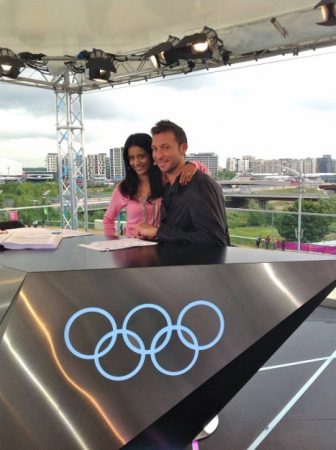 Getting to know Ian Thorpe

The Australian swimmer was part of the BBC team during the Olympics. It was great to here his views on young swimmers during a lengthy chat on BBC Three - I was reluctant to let him go!